Art: A sense of the Spectacle And Its Place in Society (excerpt)

The title “Art as Spectacle” has the impact of a drum roll, and the show it announces is almost as short in duration. There is less than a week in which to observe works by 93 artists, chosen by Thelma Golden for the exhibition at the Katonah Museum of Art here.

To quote Ms. Golden, “the extraordinary, the unreal, the tragic, the beautiful and the ungraspable all contribute to the notion of the spectacle and its place in our media-saturated culture.”

Though the show’s first prize went to Barbara Ellmann for her nine-panel series of geometric encaustics, the emphasis is on representational painting. This can be serene and straightforward, like Marion Ranyak’s high-keyed “Italian Landscape,” but is more likely to be eccentric, even weird.

The images that stick in my mind are small: Mitchell Friedman’s white-on-black monograph of a naked figure swinging from a tree, which recalls a black lament about a lynching; Marcy Freedman’s checkerboard on paper, which is half-images appropriated from Leger and half-story line in the manner of Dottie Attie, and, last but not least, Peter Krusko‘s pencil drawing of what appears to be the same ominous cloudy sky over the Hudson a couple of weeks ago.

The show is called the most prestigious of its kind in the New York City area this year. What I can say is that a production that fills the Katonah Museum with a Whitney-style jauntiness is not to be missed.

Watercolorist Taps His Spiritual Side

Santa Fe watercolor artist Peter Krusko is discovering New Mexico’s mysticism, and through his work is renewing its magic for New Mexicans.

“My work is not meant to describe a subject — a piñon tree, a bluebird, or the beautiful mountains — but to evoke and translate the feelings that we all have when we are looking at the landscape,” Krusko said.

Krusko will be a featured artist among more than 100 showing at the New Mexico Watercolor Society Spring Show 2009 at Expo New Mexico.

A resident of Santa Fe for four years, Krusko came here from the Hudson Valley of New York, where he grew up. As a young boy Krusko began drawing and painting, influenced by the 19th-century painters of the famed Hudson River School.

“I was able to paint at some of the same locations the Hudson River painters stood, and that was a thrill,” he said. Later, he painted evocative landscapes of the nearby Palisades, or the Hudson River Valley, or other scenes that inspired him.

When he came to New Mexico, he found beautiful landscapes of a different sort. He learned that beauty can be found anywhere and everywhere.

“I use the same approach to paint landscapes here as I did in New York,” Krusko said. “It’s been a part of my nature.”

While still in New York, Krusko came to vacation in New Mexico every year since the early 1980s.

“For me, it was something I looked forward to every year, not only in New Mexico, but the Southwest became such a draw for me,” he said.
In four years, he acknowledged he has discovered much, but there is much yet to be found.

“This spring, I found two new places to paint at Pajarito Plateau, by White Rock and Los Alamos,” he said. “These are places that are alive with wonderful symbols, petroglyphs and all sorts of evocative subjects painted by artists who have been here previously. It is quite thrilling.”

“I view the world as being transparent, and full of movement. Water is a moving force, with the pigments suspended in the water, and the painting becomes a force in itself.”

Krusko taught art for more than 33 years in the public schools in Westchester County, N.Y. 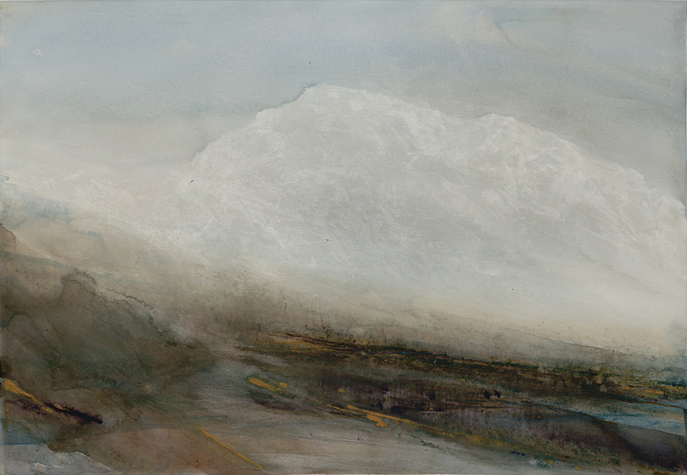 Shawger (of Gallery 822) is pleased to have new works by Peter Krusko for the show. “He paints watercolors on location, so we’re always excited to see what he’s been doing,” she says. One of Krusko’s newest pieces is titled WHITE JEMEZ MOUNTAIN. “I painted the mountains still covered with the winter gift of snow,” he says, adding, “a beautiful glow emanated from within.” Krusko frequently paints surrealistic southwestern landscapes, though he steers clear of defining his work with a particular style or subject matter. “My paintings, rather than imitating life, try to see beneath its surface,” Krusko says.